The intrepid pair of party balloons were more than 1/2 way over the North Atlantic by Sunday evening, when transmissions ended due to darkness. The last reported position is between the Azores and Iceland, west of Ireland. Darkness arrived early with transmissions ceasing at 2030Z (16:30 EDT), over 2 hours earlier than the night before where it was just off the coast of Labrador.

All seems OK so far. Altitude and speed was 60 knots. 15 stations on both sides of the Atlantic reported its final transmission for the day. You can check the WSPR web site for signal reports, click "Specify Query Parameters" and enter VE3KCL in the call sign box. The current track will mean that it will make landfall over Northern Spain, and it may well do that before the Sun rises and we see the next transmission. If it does, it will be the first in the series to cross the Atlantic Ocean. 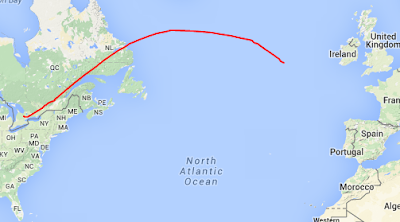 It could be transmitting again as early as 3:30 EDT Monday morning, assuming all is well.
Posted by VE3NRT at 17:55