Email ThisBlogThis!Share to TwitterShare to FacebookShare to Pinterest
Labels: Board Meetings, Board of Directors, HamWAN, MESH, VE3YRC, YRARC 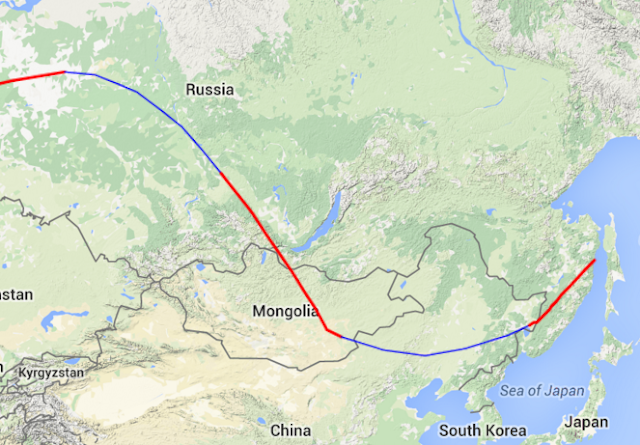 What a Long Strange Trip it's been

The S-9 balloon is still going strong. After travelling across the Black Sea into Turkey the GPS failed, which caused the WSPR and JT-9 modes to stop working properly as they're dependent on accurate time. Some signals were picked up although there are few WSPR receiving stations across all of Asia. Signals are mostly being picked up now by a station in Sweden and a couple of New Zealand hams, usually during grey line conditions. Here are the most recent spots of the primary WSPR signal.

This is from the WSPR reporting site.

The GPS recovered after travelling through the Middle East leading to speculation that the GPS failed due to jamming signals in the war zone. Fortunately when it woke up the following morning all was well again although tracking was unavailable through much of the day due to propagation conditions not favouring the 16 milliwatt signal.

The predictions based on winds and the next location the balloon was heard shows it crossing Turkey, Saudi Arabia, Iraq and Iran. It was then spotted in Turkmenistan and Kazakhstan, having crossed Uzbekistan whilst out of range of the receiving stations. It then spent a couple of days looping through Russia.

The latest report on the tracking web site shows that the balloon has almost crossed Mongolia and about to enter Northeastern China travelling East Southeast which might take it over North Korea or even back into Russia where it sidles down the coast East of China. The distance traveled is now more than 36,000 km and the altitude is still around 10,000 metres so there is no sign of a problem.

If the current wind speed and direction are maintained it could well be over the North Pacific on its way back to North America. I hope to pick it up on WSPR or JT9 once that happens.

Having just made landfall in France before shutting down last night, balloon S-9 woke up this morning over Hungary, presumably having travelled over Austria and Germany, and possibly Switzerland. So far today it has also crossed Romania, clipping Moldova and Ukraine along the way. It is now over the shores of the Black Sea, on a track towards Turkey. It has also picked up a little altitude at 10,100 metres, a bit higher than it was when over the Atlantic.

With about 3 more hours (as of 0900 EDT) of good sunlight left, it has a good chance of making it to Turkey before shutting down for the night.
Posted by VE3NRT at 09:10 2 comments:

The balloon has crossed Portugal and Spain and is heading for the Bordeaux region of France (a personal favourite of mine!). It is only 80 metres lower than it was a couple of days ago, having climbed somewhat since yesterday. I surmise this is because we've moved into an area with higher barometric pressure. If the on-board altimeter were a barometric type, that wouldn't matter, but using GPS to measure altitude means that the actual altitude will be reported, which will be at the atmospheric density where the balloon's buoyancy and weight are at equilibrium.

Now we can see how many countries the balloon can visit during its lifetime. As far as I can tell, this is a record duration flight of all of them so far. 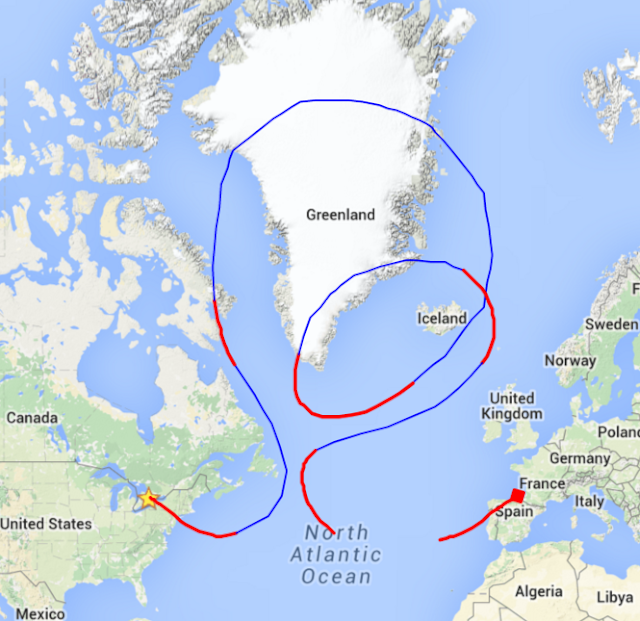 VE3KCL's S-9 Balloon Experiment has certainly been making the rounds of the North Atlantic, first doing a loop around Greenland, then another around Iceland before almost returning to the point where it passed by Newfoundland in the first 24 hours of its journey, although it is now travelling in the opposite direction.

You can see in the map below the most likely nighttime path has been added to the map in blue, while the daytime path, reported by the on board GPS, is shown in red. The night time paths are calculated from NOAA wind predictions, as explained on the web page. 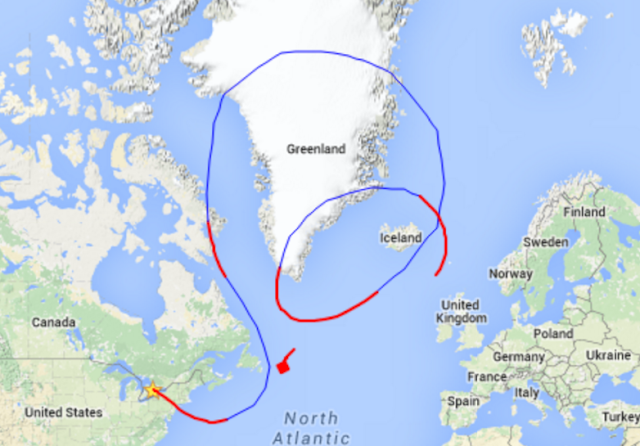 Last night's path hasn't been added yet but it is fairly easy to imagine. The last report yesterday was somewhat Southeast of Iceland and during the night it traveled Southwest where at daybreak it started reporting again off the coast of Newfoundland. Perhaps now it will find fair winds to Europe. It is still maintaining altitude at 9990 metres, or 32,776' so it seems to be holding together well.

This morning (as of 0900 EDT, 1300Z) most of the reports are from North American stations including two from Ontario in FN25. Its most recent report was picked up by only two stations, VE1VDM (near Truro, NS) and W3BH (Pennsylvania).

Dave, VE3KCL, has launched yet another balloon experiment. This one, now in its third day, is taking a different path to any of those we've seen before. 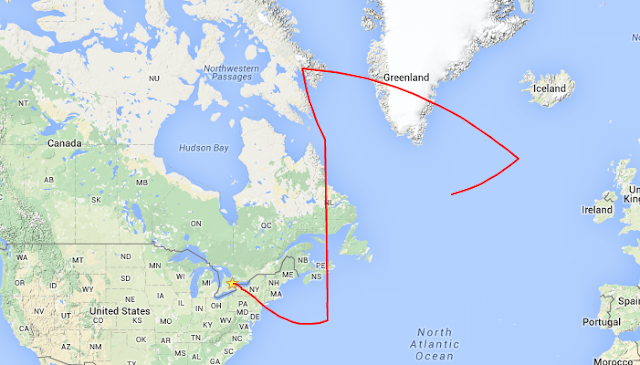 Right now it's being heard in Sweden. You can look for it on the wsprnet web page and try to hear it on WSPR and/or JT9 on 30m.