The following links were submitted by club members in March.
Here is a waterfall snapshot of the suspected OTH signal on the 30 metre band on March 23rd. Bandwidth is about 20KHz, right over the digital segment of the band. 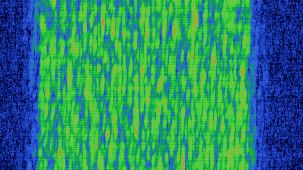 Meeting held at the Sharon Temperance Hall. Called to order at 19:32. Chaired by Chris VE3NRT
Meeting adjourned at 21:14
Posted by VE3NRT at 10:44 No comments: 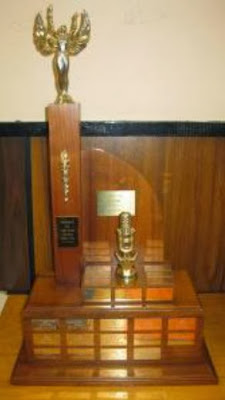 On Monday March 10 at 9:00 AM, a group of club members met in Newmarket to attend a training session at the York Region Headquarters building on Yonge St. This training was an introduction to incident management and was presented by Greg Stasyna of York Region Emergency Management. Some of you may know Greg from his other role, the commander of the military people that have been attending our Field Day for the past few years.

Greg presented this course to a class of 18 people including the four representatives of our club, Geoff (VA3GS), Richard (VE3NSD), Steve (VE3UT) and Bob (VE3WY). Greg's positive comments about amateur radio's role in emergency management were quite encouraging and showed amateur radio in a positive light to the region staff and guests present. The instruction explained ham radio in a support role and the command structure used during incidents and made for a very interesting and informative morning. The IMS-100 certification can be obtained from the province of Ontario by writing an online examination. A certification will be valuable for our members who may wish to participate in emergency radio communications support in the future.

There are higher levels of certification such as IMS-200, IMS-300 etc which we may be able to get trained for by the region in the future.

Steve VA3SRV and Brad VE3HII have offered to restart project nights on Wednesdays starting in mid-April in Newmarket. These have been very popular in the past and allowed YRARC members to get some hands-on experience with electronics construction.

This is a great opportunity to get some experience with the inexpensive but powerful microcontrollers that are now available. These can be put to all sorts of interesting uses and the first project will be able to perform some useful tasks around the shack.

You can also come to project night and get some assistance with any other electronic project (like that Softrock kit you never built?) you're trying to complete.

Please get in touch with Steve or Brad to express your interest, or just leave a comment right here.

Thanks to Bob VE3WY for suggesting the resurrection of this program, introduced at 9pm on June 6, 2007. I've asked Publius to get a current membership list (first name and call) for each club member to keep track of their progress. Please join us on the 6 metre net Monday nights (and the D-RATS net immediately afterward) to get a head start.

The award is available to anyone. There are separate classes for members and non-members. Each group has the same objective, contacts with members on as many bands as possible.

Contesting isn't for everyone, but when we talk about ARRL Field Day as an emergency preparedness exercise it isn't just about establishing long distance communications in the face of widespread disaster, but operational readiness and reliability. As the recipient of the Coffee Pot Award for my first shot at being a band captain, I've seen how important it is to have a solidly reliable setup.

Over the holidays I used Ham Radio Deluxe to participate in a few phone and RTTY contests. The last of these was the RTTY Roundup, and 30 minutes into the contest I was so frustrated with HRD I quickly installed the N1MM logger, MMTTY and 2Tone. Setup took less than an hour and the result was a much better QSO rate, easy identification of dupes (for non-contesters, this is slang for duplicate contacts, not for operators who are easily hoodwinked), and flagging of multipliers. The sudden increase in efficiency let me log more contacts in the dozen or so hours operating the contest than in 24 hours of Field Day - not necessarily an apples to apples comparison but still encouraging.

In conjunction with N1MM I used HDSDR to find signals using a Softrock Lite II connected to the IF of my K3. HDSDR can't control N1MM directly and rather than try to hack a solution while the contest was running I didn't use it for rig control. This resulted in a fair amount of knob spinning to tune in signals but as they were so close together it wasn't a big deal even at the dial's most precise (i.e. slowest) setting of 200Hz per turn. The IF output is picked off prior to the radio's crystal filtering stage, so the narrowest filter (250 Hz) can be used to feed the RTTY decoders while still being able to see a 100 KHz wide swath of the radio spectrum.

The default display in the MMTTY and 2Tone RTTY programs is amplitude over frequency rather than a waterfall. In general I keep the filter narrow (250Hz) and it's more like regular tuning than just clicking the mouse on the signal you want. What the programs lacked in point-and-click was made up by the better decoding accuracy, integration with the logger (worked call signs display in grey, new ones in blue, and multipliers in red, based on the rules of the contest), and fine tuning ability. Using two different decoders at once also helps to figure out the message when there is noise, interference and fading as they use different decoding algorithms. N1MM supports up to 4 decoders at a time which can be used to "vote" for the right interpretation.

I'm still working on finding the best way to integrate all the software without having them fight over the control ports and audio interface. LP-Bridge is a way to have two programs share the same serial port but it's a hassle managing all the layers of software, and is reputed to have performance problems as well as some restrictive licencing.

For non-contest operation, N1MM is usable but not ideal. It doesn't like to flip modes nor can it log modes that aren't supported in the Cabrillo format (JT65 and JT9 for instance, which I frequently use). So I set out in search of a better way, which will be the subject of a future post.

I'm not a competitive contester (yet), but using N1MM has transformed the contest experience. By using a footswitch and mounting the microphone on a boom for the January 18th North American QSO Party, it left my hands free to work the radio and the keyboard.

With that in place, the logging process didn't slow down the QSO rate and the number of contacts per hour has gone up substantially. With ARRL Field Day only 5 months away, the job now is to perfect the digital operation and reach the goal of doubling last year's score.

I should hope that every club member who uses simplex communications, whether on HF or VHF, has signed up for Logbook of the World. While signing up isn't the simplest of tasks, setup is getting easier and uploading logs is simplicity itself, especially with a good logging program LoTW accepts both ADIF and Cabrillo files, typically used for general and contest logging respectively. I have noticed that contesters are much more likely to load their QSOs into LoTW, as are digital operators. The confirmation rates have been pretty good. Excluding the contacts from the 80's that I transcribed from my paper logbook and uploaded, the percentage confirmation is 59%.
Posted by VE3NRT at 06:00 No comments:

Here are the interesting (at least to us radio amateurs) web sites that were found by club members this month.