Meeting held at the Sharon Temperance Hall. The meeting was called to order at 19:31. Chaired by Chris VE3NRT with 31 members and 1 guest in attendance

The Board of Directors has approved the use of the communication trailer at the following events:

Any updates to the above will be published as comments to this article.
Posted by VE3NRT at 10:03 No comments:

I have been advised by our secretary that we have received the first nomination for the Harvey Bell Award. I hope we'll see many more! Below are the winners from the past. There may be more we don't know about. 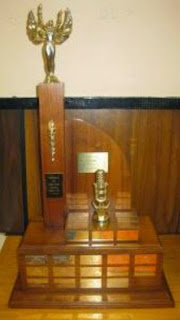 Update (2015-08-13). I discovered in a list I made a couple of years back the name of Howard Morton, VE3AQL as the 1973 winner. Based on club history I believe there may have been one or two earlier winners.
Posted by VE3NRT at 08:25 No comments:

Call for Nominations for the 2015 Harvey Bell Award


Each year about this time, the members of our radio club have the opportunity to nominate a member to be honoured with this award. Your nominations should be made in writing or by email, and should include your description, explanation or citation related to the nominee, and be presented to the club secretary no later than May 8, 2015. Nominations may be presented by individuals, or may be co-signed by several members.

Any club member would be eligible to nominate any other club member for the award. Nominations would normally be considered by the Executive Committee, or alternatively, the selection of a recipient could be voted on by the members present at a regular meeting.

The award, which honours his name, is consider the highest acclaim that the club can give to one of its members.
Posted by VE3NRT at 14:54 No comments: 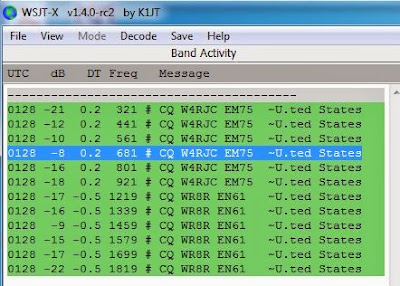 The trick with a display like this is to pick the strongest signal, and even with the noise, the compromised antenna, and the artifacts from the noise blanker I was able to work several stations. That's one of the great things about the JT modes - you can make contacts no matter what the circumstances.
Posted by VE3NRT at 08:24 No comments:


UHF repeater YRC/U:The controller on our UHF repeater is obsolete and has issues. It would not be cost effective to spend any further money for repairs on it and the technical advantages of purchasing a new controller make sense. I proposed at the last board meeting that we purchase a new S-Com 7330 (same unit as YRA and YRC/V). Tonight, the members present voted in favour of the purchase. As part of my proposal I have offered to make a personal donation of funds to cover shipping and any duty/fees. Tonight I suggested that members could donate funds if they wished and I'm pleased to report that $100 was collected. Thank you to all who chipped in. If anyone reading this would also like to "throw a few bucks into the hat", please contact David VE3DCY who is looking after the donations.

Six meter repeater YRC/6: Bruce VE3BV is donating a 6m repeater to the club. I will be picking it up in Parry Sound later this week. Installation will happen when the weather improves (requires antenna work on a roof). The repeater will be interfaced with the new controller described above. On behalf of the club, our thanks go out to Bruce for the generous donation.

Meeting held at the Sharon Temperance Hall. The meeting was called to order at 19:30. Chaired by Chris VE3NRT. 32 members and 2 guests in attendance