Meeting held at the Sharon Temperance Hall. The meeting was called to order at 19:41. Chaired by Chris VE3NRT. Introductions completed. 36 members and 2 guests in attendance

As band captain of the digital station once again, I had two important goals for 2014. The first was to beat last year's score (and targeted 500 contacts compared to 243 last year). The second and far more important goal was to lose the competition for the coffee pot award, which I won handily last year due to antenna and software problems. Fortunately this year things went better and there was more competition so I lost by a mile.

The antenna setup was much easier using the club's radial-free Cushcraft R8 instead of my 30 year-old Butternut HF6V. By Friday evening we had it up, tested and made a couple of DX contacts on 15 metres. We also strung up a home made 40m dipole which I'd built and tuned as an inverted V during my diving trip to Florida in April. True to theory, in the dipole configuration the antenna tuned a bit higher in the band but with about 2:1 VSWR on the digital subband of 40m and 3:1 on 15m it was well within the capabilities of my tuner. The club tri-bander was also available but we soon decided that it would need some repair work before it could be used again, so we set it aside for the event.

Another advantage over FD 2013 was a year's experience with my transceiver. My first contact on that transceiver was on Field Day 2013 and since that time it has logged another 5000 or so, probably about 1/2 of those in one digital mode or another.

Start-up was not without challenges, though. Digital operation requires an audio interface, rig control, PTT, etc. etc and the software didn't work quite right at the beginning causing a few minutes delay that was quickly resolved. I'd brought my docking station to provide extra USB ports and used every single one of them. The worst of the problems was that input monitor switch on the audio interface became set by accident and caused a sharp feedback sound on transmit that took a few minutes to locate, but we were shortly up and running RTTY on 15 metres.

Unfortunately Brian VE3IBW and I didn't get the QSO rate we were looking for, partly because of band conditions and partly because there was less RTTY activity than expected, so by about 6pm we were well short of the QSO rate we needed to be to hit our target. We had started on 15m but had trouble finding new RTTY stations to work so we went to 20m to work some more. After a while 20m became unproductive so I went over to the 40m CW station and talked to John VA3JI who was the operator at the time to let him know that I was going to try 40m and to let me know if he was getting any QRM. Fortunately there was no QRM even though we were operating at the maximum power for our class and the next 12 hours or so was entirely on 40 and the QSO rate started to pick up.

As night fell the tent filled up with mosquitoes and other annoying insects so Publius VE3XS commandeered the bug zapper from the (now closed) kitchen which made short work of them, and surprisingly didn't cause any QRM. On my list for next year is to bring my own zapper.

By 3AM however, the doldrums set in once again so in desperation I took a break to configure FLDIGI (software for digital modes) with N1MM. Having access to the Internet via my cell phone really helped get it up and running. Once configured, we went to PSK and spent most of the remaining time in that mode. There were many more PSK operators and we really started to make hay, even though the sunshine was still hours away. By the time Brian returned at 6:30 AM I was able to turn the station over to him with just 25 contacts to go to beat the previous years' high water mark.

The other change we made this year was to use a home-made dipole and an additional antenna. On 40m it seemed to work better than the Cushcraft so we turned the R8 over the GOTA station and ran the dipole for most of the remainder of the contest.

I went home to get a few hours of sleep and when I got back to the site at around 1PM I found that Brian had had an outstanding morning on PSK and we were closing in on 300 contacts. By the end we'd reached 309 QSOs using two modes on 3 bands, a new high water mark to beat in Field Day 2015. Next year we are thinking about using a second receiver for spotting unworked stations and maybe setting up for 80 metres as well. The multi-band capability of the digital station really helped rack up the points. In the picture below, you'll see the Coffee Pot Award being presented to someone other than me. 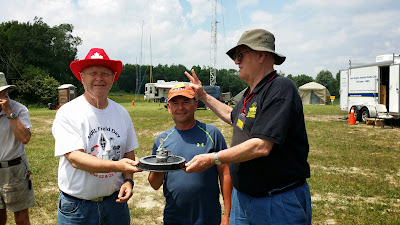 With the great weather, great food (Thanks Peter!), great organization (Thanks Steve!) and great company (Thanks everyone!) it was all in all an excellent weekend.
Posted by VE3NRT at 08:00 No comments: