Part of the club archive that Bob VE3WY presented to the board was a QSL card from our own Harvey Bell, VE3AFK (SK) to Tony Loftus, VE3FRK (SK). The most important award that the club gives out (more or less) annually is named after him.

The date? Sunday, November 29, 1964. Lyndon B. Johnson was President of the USA, Lester B. Pearson was Prime Minister of Canada, and "Baby Love" by the Supremes was the #1 song in the US and the UK. Expectations of DX must have been low at the time as his card shows the time as EST. I didn't move to Ontario until 1967 but daylight savings time was certainly in place by then. It must have been confusing.

We also have a guest book for meetings of the York North Amateur Radio Club (our former name) from Wednesday, April 10, 1963 to Tuesday, October 14th, 1969. Both Harvey VE3AFK and Tony (no call at the time) were present at that first meeting held at the QTH of R. Cronk VE3EED SK. Harvey was not at at the January 22, 1964 meeting but it is the first meeting where Tony's call sign appears, although Doug VE3VS (formerly VE3CWO) was there. Tony must have got his call sign sometime after January 8th. 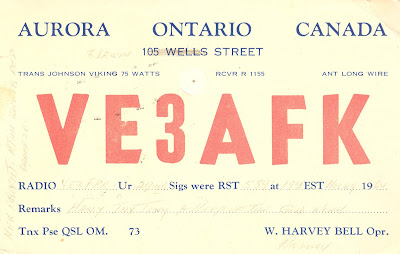 His transmitter is listed as a Johnson Viking, which came in several models. There is also a handwritten note on the left hand side written sideways which mentions a new (Hallicrafters) HT44 transmitter and a Drake 2B receiver.

This picture is of a Viking Ranger. According to the Hammond Museum web page the Ranger put out the 75 watts mentioned on the QSL.

His R 1155 receiver was manufactured for the larger British aircraft like the Lancaster Bomber and the Short Sunderland by several manufacturers. It is the top unit in the next picture.

The back of the card shows that VE3FRK lived very close to our current meeting hall and the postage at the time was a mere 5 cents, no postal code was needed, and the mail was delivered right to your door! 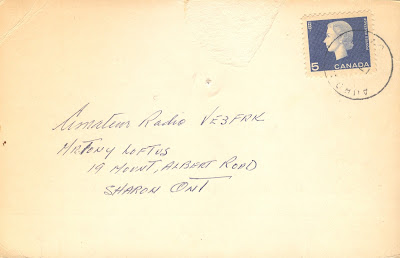