Balloon Experiment in the Doldrums

Once again the balloon's systems are asleep right now. The last transmission was heard by 22 stations, including one each in Australia and New Zealand. Not bad for 16mw.

Not much distance was made today due to very light winds aloft, with the final report of the day at only 4 knots. It has almost crossed the Baltic Sea from Sweden (after passing over Stockholm) to Estonia, making the island of Hiiumaa, part of Estonia and off its West coast, South of Finland.

The slow speed is evident from the meandering track shown on the map. The sharp right turn on the left hand side of the map is from the first report of the day. The overnight flight is always shown as a straight line from the last report of the previous day because the intermediate points are unknown, but it is likely that it held a track further West than the line indicates. The zig-zagging during the daytime trip, especially East of Stockholm as it slowed to a crawl, is due to the lack of precision in position reporting, which is done with 6 character Maidenhead Grid Locators. 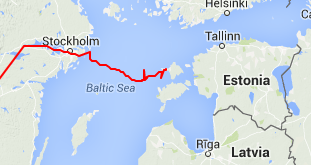 The last reported temperature on board was -10.8C. During the day it is often around 30C, which is clearly inside the insulated electronics package the ambient temperature is about -40C. Before the electronics go to sleep the temperature starts dropping with the setting Sun, and the altitude usually drops a couple of hundred metres as well. We also see the battery voltage dropping, nearing the point where it is too weak to support the radio transmissions and other powered activities.

The winds are forecast to continue to blow from the West but will not pick up much, so when (if) it wakes up tomorrow morning it probably won't have even crossed Estonia.
Posted by VE3NRT at 18:00