A recent post about the 1957 ARRL Convention in Toronto noted that the date was not given on the convention register. Fortunately, QST had been published since long before 1957 and sure enough the convention was listed as happening in "Ontario Province, Toronto" on October 18 and 19.

Even today, there are frequent ARRL Division Conventions held in the US, but sadly not in Canada now that RAC has taken their place as the organization representing Canadian Amateurs. Here is the schedule of conventions in 1957.


* The ARRL National Convention was in Chicago that year.

QST listed the convention from April 1957 onward, which was good lead time compared to some which appeared only 2 months prior to the date. Aside from the implication, which was close to the truth, that amateurs were all male at the time, it is quite remarkable that it was held at the King Edward Hotel in downtown Toronto, which has accommodated kings, queens, movie stars, famous authors (including Mark Twain, Rudyard Kipling and Ernest Hemingway), and so forth, for a fee of just $5.00 including dinner.

You couldn't buy an hors d'oeuvre there for $5.00 now. Mind you, the minimum wage then was in the neighbourhood of 60 cents an hour, so adjusted to today's minimum wage we're around $75 for registration and dinner. 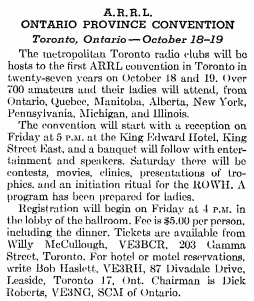 Reprinted with the permission of the ARRL. Copyright ARRL. Courtesy October 1957 QST.

Another interesting habit of those more innocent times was the publication of people's home addresses. The newspapers did this as well. That would not go over very well these days.

Another noteworthy item is in the second paragraph about the initiation into the ROWH, which is of course the "Royal Order of the Wouff Hong", which hams may ignore at their peril!

An interesting story about buying a Wouff Hong ash tray made for the 1948 ARRL Convention is on KY4Z's blog.

The convention register lists attendees, including "the ladies" numbering in the mid 200's, well short of the "Over 700" expected. However there is a note in one of the later conventions that not everyone who was there signed the book. Perhaps that was the case in this one as well.

A careful search of the pages of the Toronto Star and the Toronto Globe and Mail revealed no mention of the convention, despite coverage of dozens of other conventions in the month of October, 1957.

One of them, earlier in the month, was the convention of the Institute of Radio Engineers. One article featured their discussions of tracking Sputnik with a computer. Sputnik orbited the Earth during both conventions, and no doubt was a topic of intense conversation at the ARRL Convention as well.
Posted by VE3NRT at 06:00