Not Quite Norway: The Balloon Wanders Westward

We pick up the story in Finland this morning, with the balloon travelling North from Estonia to somewhat West and North of Helsinki through the night. We will never know the exact path it took, as the electronics power down when it gets too dark to drive the solar cells.

From southern Finland it crossed the Gulf of Bothnia heading Northwest into Sweden, picking up speed to a still-slow 28 knots, which gradually reduced through the day until its final report at 1818Z (14:18 North American Eastern Daylight Time) where it was doing just half that speed. 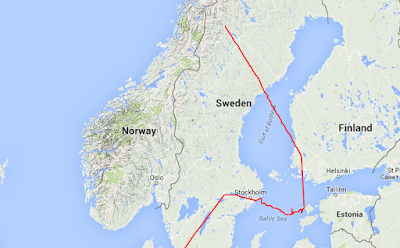 Its final reported position for the day is at the foothills of the Scandinavian Mountains, perhaps 150km from Norway (I do wish the map had a scale). It is not a densely populated area but the last report has it right over a road which winds it way around lakes and through the mountain valleys, continuing on to Norway. It looks like it might be a spectacular drive. The mountains are not particularly steep and the balloon is some 20,000 feet above their highest peak.

The WSPR reporting site shows LB9YE continuing to hear the WSPR transmissions for 48 minutes after the last position report. It only seems to have heard the "main" WSPR transmission, not the secondary information that provides temperature, battery condition and the final two digits of the grid square. Those reports show the balloon moving from JP85 to JP75, which includes both Sweden and Norway. LB9YE is on the Norwegian West coast about 185km Southwest of the last reported position.

Earlier in the day I checked the web site to see who was hearing the reports. First the first hour or so of the day there were reports from New Zealand and Australia.The site can also display a map of the communication paths between stations. This one shows all stations hearing VE3KCL at around Noon today. 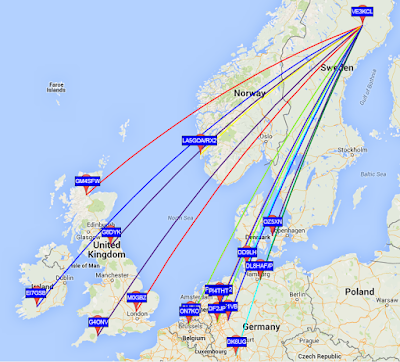 In spite of being wrong 2 days in a row about its forecast direction, the winds appear to want to take it off the West coast of Norway only to make a right turn and head back towards Russia. As this may well happen overnight we may not see that track due to lack of overnight position reports. It might also head to Greenland if it picks up a different wind but we'll definitely know if it does that.

The Flight S-4 Status Page is also providing comments on the flight and is worth checking out. It has posted some other interesting links recently.

The development of new weak signal protocols has spawned great new opportunities for low coast experimentation with some spectacular results.
Posted by VE3NRT at 18:00