How I Spent My Summer Vacation

In the distant past this used to be an essay topic that teachers handed out the first day of school.  Now that I have grabbed your attention let me tell you about spending some of my vacation time as a radio operator at the Pan Am Games.


A Call for Volunteers

It all started with a request for hams to volunteer as radio operators.  We had to undergo an online interview and latterly a police check.  When the smoke cleared I was offered a position as a VCC Supervisor; VCC translates to Venue Communications Centre.  For the Pan Am games I was assigned to three sites – HRD, TTS and MWW. HRD was the site of the mountain bike cross country competition at Hard Wood Hills just north of Barrie.  TTS was the shooting site just east of Crookston.  And MWW was the white water canoe and kayak course just outside of Minden.  For the Parapan Am Games my venue was MAR, a complex in Markham where they had the table tennis competition.

Before any of this there was training and more training and too much training.  From my perspective too much “touchy feely” and not enough practical.  A lot of the training was online.  The rest meant travelling down to the Pan Am HQ on Queen’s Quay in Toronto and at one of the actual sites up North.

They went after hams as supervisors as most of the radio operators, all volunteers, had never used a radio.  All the volunteers were given session on voice procedures but actually did not handle a radio until they arrived for their first duty session.  I showed up at one training session with eight FRS HTs in my bag and suggested that we might use these.  This did not fly as it had to be done their way with myriad PowerPoint presentations.

Hams would have had no problems with any of the voice procedure as we used OVER, OUT, STANDBY, COPY, etc.  That said, I was less than successful in getting everyone to say OVER or OUT but not OVER OUT.    They devised a sandwich approach for initiating a transmission.  Here is an example: "VE3NRT, this is VA3GS calling VE3NRT, OVER"

The response would be: "GO for VE3NRT, OVER"

I assume the call sign of the station that was being called was given twice for the benefit of inexperienced operators to ensure that it was heard.

The operators in the VCC, who had the call sign VCC, monitored one “talk group”, i.e. a “net”. Stations in the talk group were free to call any other station in the same talk group without requiring permission of the VCC.   If they needed to chat with someone in another talk group then VCC would send them off to a common channel for this purpose.  At any time VCC could assume control of the talk group.  Two of the talk groups were very busy and required an operator specifically assigned to it.   For less busy talk groups an operator monitored two at a time.  If we were an operator short or an operator had to leave the VCC it was my job to cover his/her assignments.

The radios were, with one exception, a Motorola HT using a PTT.  Each was equipped with an ear phone/mic.  All the channels had been programmed into the radios.  We were operating somewhere in the UHF band.   At the three sites up north we were in trailers or tents so the HTs were able to do the job.  At MAR we had mobiles with an antenna attached to the roof via a mag mount.  These radios had external speakers that produced lousy audio.  So I reached into my trusty junk box and found some 3.5 mm female headphone connectors.  I soldered these parallel to the speaker leads and cut one of the speaker leads between the join and the speaker and used cheap stereo headphones instead of the speakers.

Getting the soldering iron through security required a lot of fast talking.  Security was tight at all the sites.  Operatives from a private security company were on site 24/7 along with the OPP up north and the YRP in Markham.  We all had had to have photo ID and on the card was the areas we were restricted to.  At Markham I had to get an upgrade to my ID to allow me go down a particular hallway to the VCC. Securing the ID meant a trip to North York where we also issued our uniforms.
At my first venue, HRD, the team consisted of four hams and a woman who had never used a 2-way radio.  However she was a quick study.  This was an extremely busy site with over 6000 paying spectators.  The only medical emergency we had to deal with was a young visitor who ran into a nest of wasps while walking through the woods.

At TTS the team consisted of two high school students and another woman.   Steve VA3SRV had been the VCC that day before and had whipped them into shape.  This was a very compact site and they had room for only 150 spectators.  Eric VE3EB was also at TTS in a managerial capacity.
Then off to Minden for three days.  I used this is an excuse for a mini vacation.  My wife visited friends who cottage in the area while I toiled at the white water course.  The team this time consisted of three hams, a former dispatcher for the TTC, a former dispatcher for a fire department and a professional engineer. 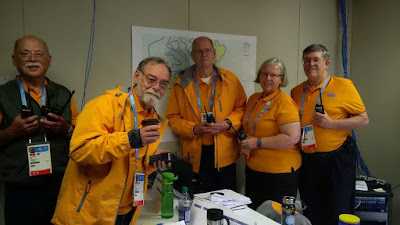 I was on site by 0600 each day, transported by a shuttle bus.  Like all the sites, my day would commence with a meeting of all the venue managers at 0630 then on to a meeting with the radio team.  We would open the VCC at 0700 and then do radio checks of all the operators on each talk group.  Periodically throughout the day we would do an ALL CALL with various announcements. Usually we closed down the VCC at 1800 or later dependent of the day’s competition schedule.  The last day at Minden we had to shut everything down for an hour and head off to the safety of trailers during a thunderstorm.  The volunteers on the other side of the river were all supposed to go to a fleet of official Pan Am vehicles.  Unfortunately they were all locked.  We stayed dry, they got soaked!

The three venues up north all used huge banks of generators to provide the AC necessary to run the site.  At Minden they laid 6 km each of electrical cable, CAT 5 Ethernet cable, and fibre optic cable. What had been laid down then had to be removed as soon as the event was over.

They had no one officially on site to look after problems with radios so it fell to us in the VCC to look after this.  Replacing batteries, microphones, ensuring that all the radios were put on charge before the VCC closed became part of our duties


The Parapan Am Games

The Parapan Games in Markham were different.  I was on duty for five days.  The first two were on a Saturday and Sunday so I was able to drive down to Markham, parking my car at my dentist’s office and walking to the site.  It is a huge facility that cost $48 million dollars!  For Monday through Wednesday I used the VIVA bus from Aurora to Richmond Centre and on to another bus that rocketed down Highway 7 using the new bus express lanes.  Not quite as convenient as driving as I had to catch the VIVA bus in Aurora at 0514.   At Markham I had nice team to work with. No hams, but they had worked in the same capacity at the Pan Am Games.  We also had shorter shifts.  At 1430 another team took over. 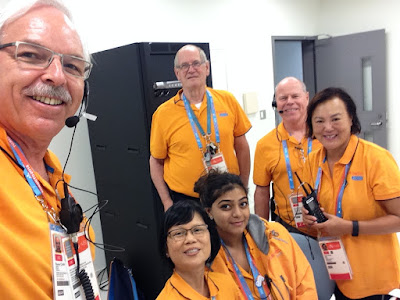 All in all a good experience.  Met some really nice people.  The only downsides were ugly golf shirts, an equally ugly jacket and a less than useful knapsack.