The VE3KCL s-4 balloon experiment woke up this morning just off the coast of France spent the day working Northeast across the country, passing over Luxembourg, Germany, and reported its position just across the Danish border on its final transmission of the day. 14 stations, all in Europe, received this final report.

During the previous night, the winds aloft changed from Southeast to Northeast and then slowed down, and by the end of the day it was only doing 44 knots compared to 68 knots earlier in the day. It was closing in on Odense Denmark by nightfall, where sunset was 20:32 local, or 1832Z, just 10 minutes before that final report.

Based on the forecast upper level winds in Europe, it appears that the balloon will continue North and then veer towards the West, which if so will cause it to cross the West coast of Norway before heading towards Iceland and further North from there. Based on a smaller scale upper level wind forecast we might see the balloon pass Northward off the East coast of Greenland before doing a right hand 180 degree turn and heading North to South across Russia. Then again it could find its way along a more Eastward course over Denmark where the winds diverge a bit and go straight to those Southerly winds in Russia without taking another tour of the North Atlantic. We should know by tomorrow morning.

Of course, anything could happen between now and then. Before getting ahead of ourselves we can just hope that the balloon wakes up in the morning. If it really does find its way that far North it might stay in the midnight Sun for a while, giving us more reports from which to track its progress. 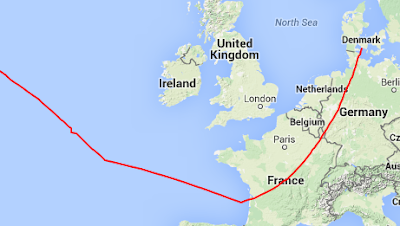 This map shows the track from a little before it shut down last night to the latest report. Note the little zigzag on yesterday's path from the West. It is an artefact of the position reporting which is limited to the precision of a Maidenhead grid locator.

The segment just before it reaches the coast of France is a straight line. This is another artefact due to the lack of reporting through last night. A straight line was drawn between consecutive points, but it is more likely that it really took a curved path somewhat South of that line.

So far the balloons have reported for 3 days and 5 hours and covered a distance of 7,668 km (as the crow flies, I believe). If you want to check out the position in the morning, a map is available.
Posted by VE3NRT at 18:00