Just 5 of us this time, with Mike VE3FGU in the North and Chris VE3NRT at the South end for a longest path of 27km. Rob VE3RQB joined us for the first time having cobbled together a Bazooka running from inside his shack, and was copied at 5x1 by Chris VE3NRT but well over S9 by Mike. John VA3JI and Brian VE3IBW were all clearly audible which allowed for some casual conversation before signing off at 8:25. 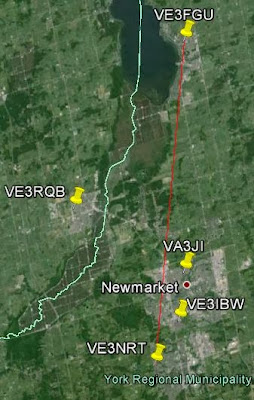 After the net Chris and Brian had their first successful QSO with digital voice using FreeDV.