Conditions seemed to be better than usual with better signal strengths reported by most stations. Matt VA3MGN was a bit stronger but still difficult to hear. Bruce VE3BV and Mike VE3FGU in Keswick came in strongly, and John VA3JI joined us for the first time using his 17 metre antenna on the 3rd harmonic as well as Brad VE3HII. Brian VE3IBW backed off his power this week to 10W to reduce RFI problems in his QTH.

VE3IBW and Chris VE3NRT decided to do some (only partially successful) testing with FreeDV afterwards and we contacted by Mark VE3CT while setting up, using a dipole in his kitchen.

Most stations were heard by Rob VA3RQB in Bradford. Longest path was again about 50km. VE3NRT also thanks VE3FGU for the LoTW confirmation. 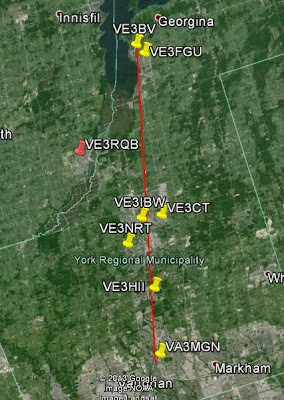