We had good participation in the net this week with Mike VE3FGU, Brian VE3IBW, Brad VE3HII, John VA3JI, Chris VE3NRT, and Bob VE3WY. Signal strengths were good except that Bob seemed weaker than usual with 5x3 and 5x5 signal reports. Chris at net control had his amplifier working well again up to about 250W output.

The longest two-way path of the day was Bob to Brad at about 50km, and everyone could hear everyone. 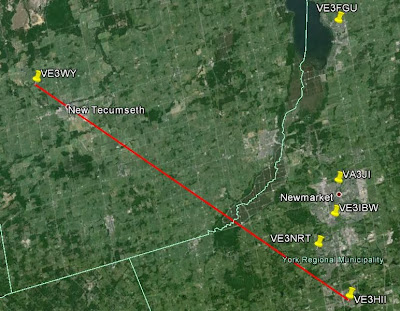 The most encouraging report was from John VA3WPN, between Bradford and Woodstock, who reported signals loud and clear at his location. Unfortunately they had faded by the time he was in a position to transmit but at 150km this path is 3 times our previous record.

Hopefully we'll be hearing from John in a future net and seeing some more surprises before too long. 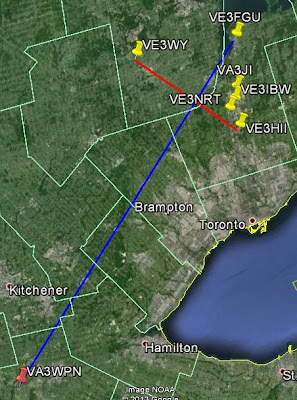 After the net, VE3IBW and VE3NRT did some further experiments with FreeDV and managed to get two way transmission but only one-way audio, but at least there was progress.