For this week's net we had Charlie VE3SYK, Bob VE3WY, Brian VE3IBW and Chris VE3NRT. Everyone transmitting could hear everyone else this time. Steve, VE3EZ, also heard Chris but not the others (likely before Charlie checked in). Steve VA3SRV could see us on the SDR waterfall and reported by email that he could hear both the USB conversation and Nick on 50.140 FM. This may be an anomaly in Steve's SDR setup as we wouldn't expect to see an FM signal in that part of the band. It appeared to be a repeater input which makes the frequency even less likely. The strong FM is apparent in the image below, along with a much weaker and thinner looking upper sideband signal on 50.175. 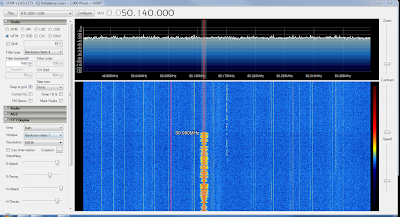 Bob is 39km away from Chris which was the longest path of the night, and there are few obstructions between the two locations. Power at both ends was about 100W. Brian increased power from 10 to 50W which improved his signal, and Charlie complained of a higher noise due to a neighbour's activities. City dwellers would be ecstatic to have noise levels as low as Charlie's, mind you.

Frequencies on each radio varied somewhat although all were within about 200Hz, which is a mere 4 parts per million spread. Everyone reported having to tune above net controller Chris VE3NRT,

Paulo VE3RAO reported hearing voices buried in the noise from Richmond Hill, and Steve VE3EZ heard VE3NRT from Uxbridge. Like Steve, VA3SRV, neither had antennas that would allow them to transmit on 6m. 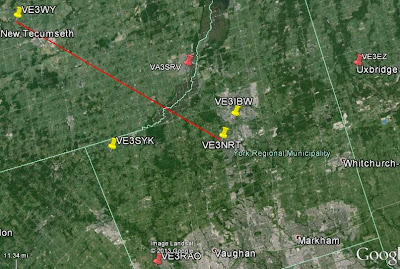 One topic of the night was to try out the FreeDV software for digital voice communications. As not everyone is going to have that set up we plan to test it on a different schedule sometime soon and perhaps put it in play a bit later. It would also be fun to try JT9 to see if the distances can be improved, and PSK, and RTTY, and perhaps some CW.

Six metres is a challenging band, which is why we're giving this net a try, to experiment and test 6m capabilities at our own stations. All amateurs are welcome to participate.