Setting up an RTL-SDR Dongle - Part 1

Through the magic of mass production and free software, an amazingly capable SDR receiver can now be had for less than $20. The hardware a simple "Dongle" that connects to the USB port of a computer one one end, and to an antenna (or converter) on the other. The power available on the USB port is sufficient. 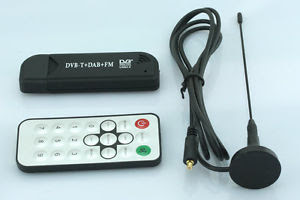 The devices were designed to receive DVB-T digital television broadcast signals, used in parts of Europe, Asia, South America, Africa and in Australia and New Zealand. In 2010 Eric Fry and/or Antti Polasaari figured out how to used the dongle as a general purpose software defined radio. Various web sites argue about who did what, but it appears that both figured prominently into the early development of this capability.

There is general agreement that the key attribute of this devices is "excellent performance for the price". They don't perform as well as higher priced devices but for the money provide an excellent way to try out dozens of different modes and interesting functions ranging from casual listening to radio astronomy.

I bought my RTL-SDR from Noolec, but they're available from dozens if not hundreds of mail order suppliers. The Noolec dongle costs less than $20 USD including shipping. I also ordered some cables and the Ham-It-Up converter. The dongle I bought has an amazing tuning range from 25 MHz to 1.8GHz. The Ham-It-Up ($45.99 USD) upconverts the LF, MF and HF bands by 125MHz so that the dongle can be used to receive those bands also.

The dongle ships with a tiny antenna. This is great for initial testing as you can receive local FM stations and other stuff with it, but additional cables are needed to connect to an outdoor antenna. The connector on the dongle is an "SMX" while the Ham-It-Up uses the more commonplace SMA connector. These cables are a few bucks each.

Armed with all this stuff, I was able to use free SDR software to turn my laptop computer into a wideband radio receiver. After it shipped to my office, I had it up and running on the GO train coming home and was able to tune in a taxi dispatcher, a broadcast FM station, and a couple of airplanes using the 4" long antenna that came with the unit. The performance doesn't rival my K3, but neither does the price, and the K3 only tunes up to the 6 metre band although I hope to get a 2m module for it sometime soon. The dongle reveals the myriad of signals around the house - and they sure are plentiful. One could while away many hours trying to figure out what they all are and where they're coming from.

One application I wanted to try was using the 8.215 MHz IF output from K3. With it, I can see a waterfall display of signals above and below the K3 tuning frequency, before the roofing filters are applied. The performance of this setup I will class as "useful". Not terrific but well worth doing and it will be the subject of another article.