Everybody's definition of what is cool or useful is different, of course, so this is just a little bit of what intrigued me at Dayton. Over the years, I'm sure many of these are going to cost me lots of money and even more time, but that's what a good hobby is all about, I think.

First, because I know all of you will be on the edge of your seats with anticipation, here's what I bought.


Mostly useful stuff - some for future use. The RT software works well and the headset is comfortable and sounds very clear. Three of the ferrites are deployed. The project box and one of the BNC connectors will be ready for Field Day so I can have a spectrum display available (that's another reason to join the 40m phone team - hint hint). 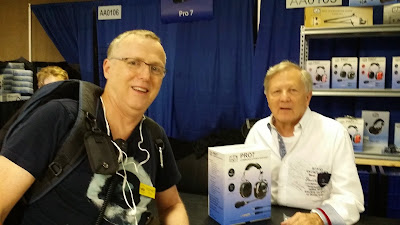 The only workshop I attended was AMSAT. They have ambitious plans. 5 new satellites going up (Fox 1A through Fox 1E). They're also joint bidding on a project to orbit the Moon, which is not directly an amateur project but may be repurposed after the main mission is over to become a resource to amateurs. The object of the main mission is to participate in a competition to deliver the most data over an RF communications link from Lunar orbit to an Earth station.

I found these guys on the edge of the outdoor market. They're building an open source & hardware platform for satellite ground stations. This is includes antenna rotors for satellite tracking. If you want to build one you can download the plans for 3D printing the gears and other components. While few of us owns a 3D printer your local library may have one like the Aurora Public Library does.

The goal of SatNOGS is to build a network of telemetry stations. The receiving is done with the RTL2832u SDR dongle.

One thing that I find confusing is that the unit I saw at Dayton doesn't resemble the picture on the SatNOGS web site. The Dayton unit was about the size of two cubesats, one on top of the other, while the picture is more like an electrical utility box.

HamWAN is in intriguing alternate (and complement) to the MESH networks our members have experimented with over the past few years. At frequencies of 5GHz, it can support high speeds and like MESH is built upon off the shelf hardware. It doesn't do MESH though. The networks are pre-planned and the nodes are expected to be operational most of the time.

The basic hardware units are a grill style dish and RF Access Point (which has an antenna connection at one end and Ethernet/Power connection at the other). These units are around $80 US each. One of main use cases that I was told about was connecting EOCs together. The hardware would be suitable for that as well as on a communications trailer in home installations. This has possibilities for the club, I think, for building a network to support both Municipal Emergency Management and general club high speed data communications.

Once high speed data communications has been established, it can be used for repeater linking like Echolink, D-STAR, P25, DMR and System Fusion. It can also serve for standard telephone style VOIP, videoconferencing, rich media (e.g. big email attachments) and anything else that can be moved over an IP network.

I've seen these guys before, and they have a little antenna rotor for $330 US. They were demonstration a similar model that also did elevation control and expect it to come in around $500 when available, which is not for a while. So build or buy, that is the question. Information is on their web site.

This new product from Flex Radio allows control of the radio without a computer. It was pretty exciting for the Flex fans. 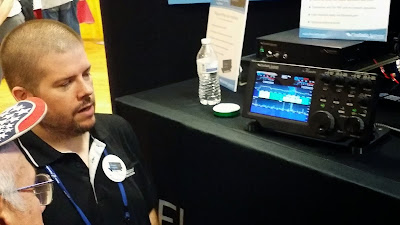