At least for me it was. It was a beautiful card from Tchad depicting a man leading a camel through the desert at sunset. without a cloud in sky. The card came recently from TT8/US3EZ and was for a CW QSO on 20m on July 17, 2013. I was pleased to receive it, but had no memory of having a contact with Tchad - although as it was 18 months old that's not so surprising.

So today I sat down to answer the most recent batch of cards and it was the last one in the pile. When I got to it I searched my log for the contact only to find it wasn't there. In fact, I had zero contacts in July 2013 because I hadn't got the antenna back up after Field Day (you might remember I was the recipient of the coffee pot award in 2013 for my antenna troubles). What's more is my calendar shows that I was at work at the time.

It's too bad. It can't be a logging error at my end so Sergey must have heard someone else's call sign. Maybe it was VE3NR who gets one of mine from time to time, or maybe one of the 3-letter calls in the NR group who got their licences about the same time as mine. It seems a shame to throw away such a nice card, especially for a country I don't have yet, but that's the way it goes. It's a shame that some other Canadian ham won't get their card. 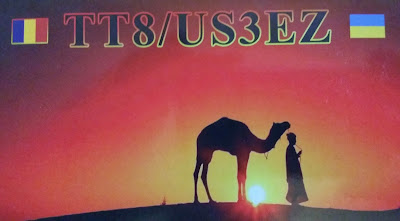