Somewhere around December 10th, or 9th, or maybe the 11th, depending on the account, Edward Rogers Senior made the first successful transatlantic radio transmission by a Canadian amateur operator. The event was more significant than it sounds. Commercial radio was at the time using long waves, at low (LF) or very low (VLF) frequencies. The thinking of the day was "the lower the better" and radio stations for transatlantic traffic were huge undertakings. Some of the big ones used generators to produce these low frequency waves. At least one, the Grimeton Radio Station in Sweden is still operating, although only once a year.

The 1921 Transatlantic tests, sponsored by the ARRL, used wavelengths around 200 metres. This is still quite low by amateur standards. It wasn't until several years ago that the lowest frequencies in use by amateurs were in the 160 metres band, although now we have small 630 and 2200 metre for experimentation at low power. The tests proved that long distance communication was possible with a tabletop station rather than a building full of equipment.

Edward made this historic transmission from his lodgings at Pickering College, on Main Street in Newmarket, Ontario, right in the centre of York Region using a 500W spark set and call sign 3BP. He was heard by Paul Godley, operating a receiving station in Ardrossan, Scotland, using a Beverage antenna. Rogers was the only Canadian station to be heard during that weekend of testing.

The York Region Amateur Radio Club is celebrating the 100th anniversary of this event by running station CF3BP. Club members will be operating on various bands and modes from November 13th to December 12th. Logs will be uploaded to LoTW, qrz.com, and others. We are also in the midst of designing a QSL card for anyone in our logs. Canadian amateurs can send us an SASE. Outside Canada, please send $3 or equivalent to cover postage.

Edward went on to found Rogers Majestic, a very successful radio manufacturing company, a vacuum tube company, and AM radio station CFRB, located in Aurora, Ontario (also in York Region and the city that I live in). CFRB was heard all over North America and exists to this day. Edward's son, Edward "Ted" Jr., founded Rogers Communications in 1960, which is a principal player in the Canadian telecommunications industry.

See you on the air!

Update - the first electronic QSL has been received. Thanks Marcel! 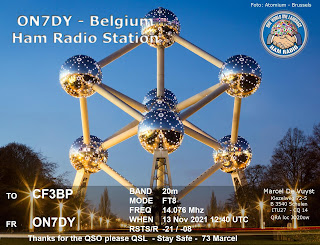