The balloon (see yesterday's post) hasn't been heard from since 6:44 pm last night (2244Z). As it would have been night time over the mid-Atlantic by then, it is probably due to the discharge of its batteries. By now (1514Z) it should have picked up again, so hopefully it is just due to unfavourable propagation and not a failure of some kind.

The day before, it shut down a little later (but of course was further West with more sun) but picked up operation quite early, as you can see from two successive beacon reports. Note the timestamps on the left in UTC, and that the last report of the evening was at 2320 reported by Germany and the first report in the morning was at 1052 reported in Illinois.


Digression: As mentioned before the WSPR protocol has been hijacked to provide additional information. The reports with the power shown (correctly) as 0.020 (20 milliwatts) are well-formed WSPR reports. The others (like the second line above) re-use the fields like the transmitter power to convey other information. 20 milliwatts was all that was needed to communicate 23,500 km to New Zealand, which is over 1,000 km per milliwatt, assuming the speculation that it was long path is correct (otherwise a mere 16,500 km).


The map appears to show it wandering around in the same area at the end of its path. The web site doesn't mention this and has no indication that anything might be amiss. 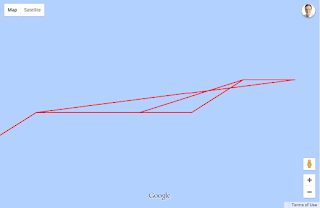