Well it wasn't the best of weather. Not the best at all. The high of 13C was reached overnight, with a high of 10 for the remainder of the day. It was also raining - sometimes heavily, but it was mostly just a persistent drizzle. When you're riding a motorcycle though, light rain can be like a fully clothed dip in the pool - and a cold pool at that. The hardy souls that turned out were dressed for the occasion and made the most of the situation. 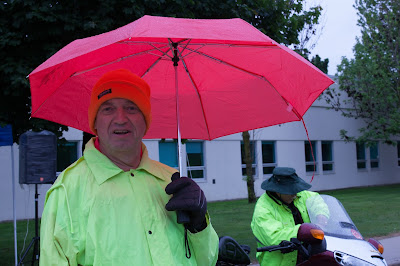 Consequently the turnout wasn't great. We had 11 motorcycles, 1 motor scooter, and one trike. Plus a few cars, and an OPP SUV and motorcycle rider who drove the route to help keep them safe, and of course observing all relevant statutes. Rob VE3RQB and Carlos VA3CAZ stationed themselves at Mount Albert Public School. Two Steve's, VE3UT and VE3EZ were at the Udora Community Hall, while John VE3POJ ensconced himself at Tim Horton's in Keswick after following the first wave of MADD riders along the first part of the route. Me? I stayed behind at the Newmarket Town Hall to be net control using VE3YRK VHF with D-STAR. 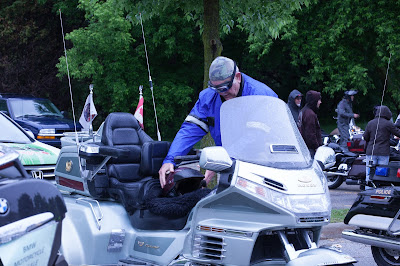 One of the riders turned out to be Jay, VA3COW, and Gary VE3NMI was on the organizing team and we had plenty of time to chew the rag about radio subjects. Everyone made it back to Newmarket Town Hall for the barbecue after the riders had all returned safely. Gary is on the left in this picture. 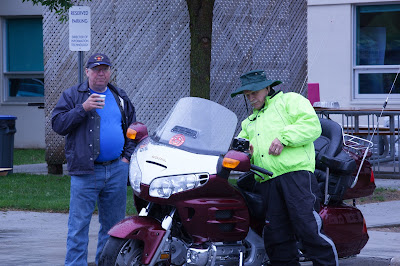 The ride itself was uneventful. We keep track of when the groups arrived at the checkpoints. We were a little concerned when the second group's chase car arrived at the second checkpoint in Udora before the bikes did, and they were 10 minutes overdue. Fortunately they showed up before we had organized a search party. Then they arrived at checkpoint 3 in Keswick before the first group - quite a feat as they were 40 minutes behind them. It turns out they took a shortcut which at least meant that everyone would arrive back at the Community Hall at about the same time for the food. From left to right Carlos VA3CAZ, Steve VE3UT and Rob VE3RQB. 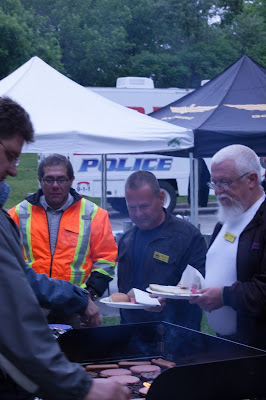 At about 1:30 we called it a day and headed back to our warm abodes. While the WX wasn't the greatest we had a good time and let the organizers know we'd be back next year - hopefully to a warm sunny day like previous years.